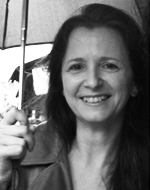 Paula Cadima is co-director of the MArch+MSc Sustainable Environmental Design, Supervisor of the AA PhD Programme and a Member of the AA Teaching Committee.

She has been in architectural practice and environmental research for more than twenty five years and has taught at the Faculty of Architecture at the Technical University of Lisbon, where she was Founding Director of the Bioclimatic Architecture MPhil Programme.

Her PhD was obtained at the AA and focused on Transitional Spaces, but her current research interests extend to themes related to refurbishing the city, urban microclimates, affordable housing, sustainable working+creative environments, energy efficiency and passive cooling design. She published over 30 papers in conferences and journals in these topics and has given invited lectures and keynote speeches, worldwide.

She has worked for the European Commission in Brussels for five years, where she was involved in the management of projects promoting energy efficiency, renewable energy sources and world-class research in emerging fields. She chaired the Environment & Sustainable Architecture working group of the Architect’s Council of Europe in 2009 and was the president of the International PLEA Network from 2011-2017 and continues on the Board of Directors.

She has supervised 5 PhD and 1 MPhil students to successful completion and examined 15 PhD (8 in the UK, 2 in Belgium and 5 in Portugal) and 5 MPhil in Portugal.

1986-87 GAPTEC (Technical Office of the Faculty of Architecture in Lisbon). Masterplan for the Campus facilities of the Technical University of Lisbon and exhibition design for the 1st Congress of the Portuguese Built Heritage in the World, Fundação Calouste Gulbenkian in Lisbon.

1985-03 Private practice design of various projects in Portugal, including new design and refurbishment of residential buildings, a kindergarten and the design of a catamaran, and collaborated with artists in various projects, among others the urban art work “Shadow Project – STAGING THE CITY” commissioned by the Metropolitan Underground of Lisbon with artist Fernanda Fragateiro, and was awarded 2nd Prize at the shop window design competition in 1985 promoted by the Townhall of Lisbon with artist Miguel Branco and designer Filipe Alarcão.

2001       International Competition for the School of Technology and Management, Polytechnic Institute in Beja, Portugal – ACE-Engineers.

2000       International Competition for the Art Crafts and Health Schools of the Polytechnic in Castelo Branco, Portugal – Architects Jorge Estriga and Rita Amado.

2009 Sustainable Construction – a common language for the construction sector, joint project between the Architect’s Council of Europe and the European Concrete Platform

2007       The European Strategy Towards Sustainability in the Built Environment. Proc. PLEA 2007 Conference, Singapore.

2000       TRANSITIONAL SPACES: the potential of semi-outdoor spaces as a means for environmental control with special reference to Portugal”. PhD Dissertation. EESP, AA, London.

1996       The Role of the Balcony on Buildings in the Contemporary European City: A Case Study in Lisbon. Proc PLEA 1996 Conference, Louvain-La-Neuve (with S. Yannas).